The additions of this version are the new whole sample and extensions showing how to use GeneticSharp to solve a Sudoku.

Compound chromosome to artificially increase genetics diversity by evolving a list of chromosomes instead of just one. Sub-genes are inlined into a single compound list of genes.

Fitness class that can evaluate a compound chromosome by summing over the evaluation of its sub-chromosomes.

Represents each type of chromosome for solving a sudoku is simply required to output a list of candidate sudokus.

A class that represents a Sudoku, fully or partially completed. Holds a list of 81 int for cells, with 0 for empty cells. Can parse strings and files from most common formats and displays the sudoku in an easy to read format.

This simple chromosome simply represents each cell by a gene with a value between 1 and 9, accounting for the target mask if given.

Evaluates a sudoku chromosome for completion by counting duplicates in rows, columns, boxes, and differences from the target mask.

This more elaborated chromosome manipulates rows instead of cells, and each of its 9 gene holds an integer for the index of the row’s permutation amongst all that respect the target mask. Permutations are computed once when a new Sudoku is encountered, and stored in a static dictionary for further reference. 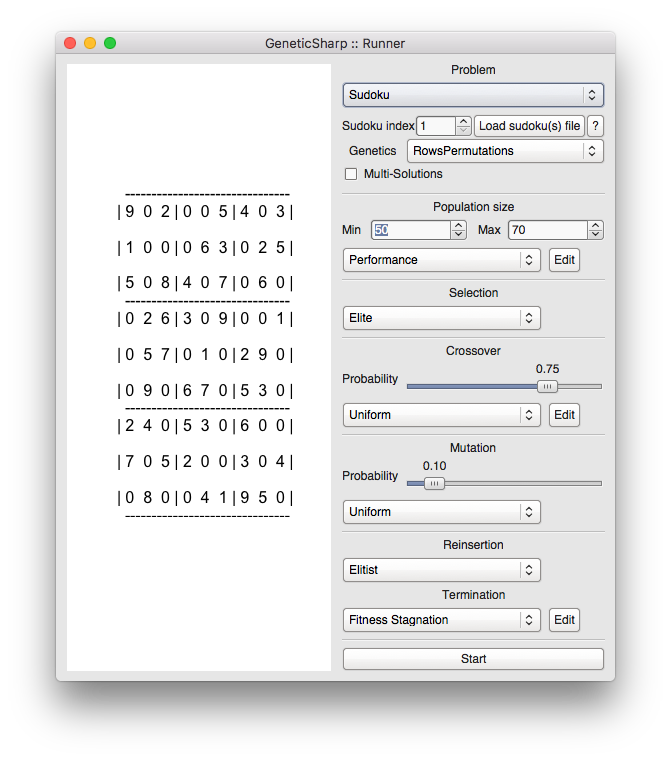 I would like to thanks to Jean-Sylvain Boige (@jsboige) for contributing with those great new samples and extensions and for use GeneticSharp in his Artificial Intelligence course in French engineering schools (course).

Take a look on the pull-request for more details about those new features: New Sudoku extension and GTK# sample #43.